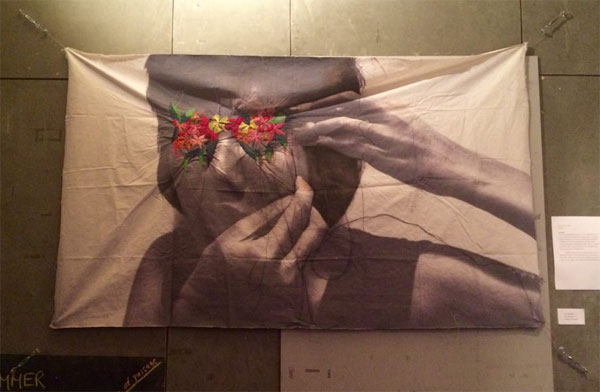 Note: Keep in mind that this review was written in November, and makes reference to events (and a temporary art exhibition) that took place at CHOMP! Café at that time.

Elli: So, we’re sitting here at CHOMP! Café, writing our review, snacking on the remnants of our meal and drinking delicious dark beer Lao.

Faz: We should note that CHOMP! is not a vegan restaurant, but has some vegan options. These have mostly been created by replacing meat with vegetarian versions; you can get a breakfast with meat or vegetarian sausage, for example.

This is cool, but part of being vegan, for me, is really focusing on what vegetables can bring to the table, as creating more and more fake meats keep centralizing the role of meat in our meals.

Elli: I have to say, it broke my heart to see a delicious-looking vegan chicken schnitzel on the menu, only to find out that the accompanying wasabi mayo had eggs in it. So close, but so far!

Faz: Okay so let’s get to the food. We ordered the pasta with vegan bacon, spinach, cherry tomatoes, chilli, lime and garlic as well as the vegan Asian duck wrap, with roasted peppers, pumpkin and garlic herbs.

Elli: By the way, it’s kind of weird to see “Asian” duck on the menu, in Bangkok of all places- what kind of Asian-style duck are we talking about here? The wrap was pretty good, but for me the standout was definitely the pasta. 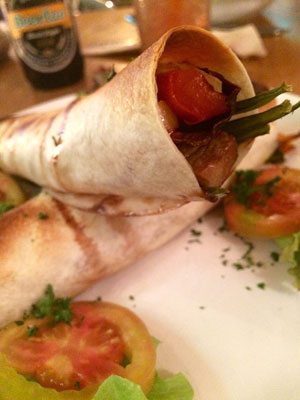 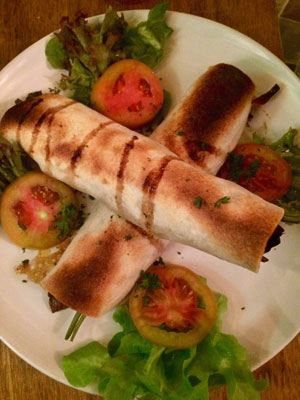 Faz: I agree. The vegan duck came in a thin, pancake-like wrap – this was both crispy and chewy, and beautifully toasted – the first time I actually liked the sandwich bread more than the filling. All together, I was pretty underwhelmed by the flavours. I could barely taste the capsicum and pumpkin, and everything was overpowered by the duck sauce. I couldn’t finish the duck meat… it was kind of bland tasting.

Elli: Agreed! The main complaint from me is definitely that the flavours didn’t pop as much as they should. In comparison, the pasta was so flavourful – I could taste everything so clearly and it felt both hearty and light.

Faz: Yeah, the wrap was a perfect example of something that would be way better if it just had a bunch of great vegetables in it, rather than a fake meat. In contrast, the pasta had such a beautiful combination of flavours – delicious, salty, thick chunks of fake bacon-like meat, fresh cherry tomatoes, wilted spinach and chilli olive oil coating the pasta. It was a little salty, but sprinkling the lime on top made it like a warm, filling pasta salad. If you’re gonna go with fake meat, this is how you do it. 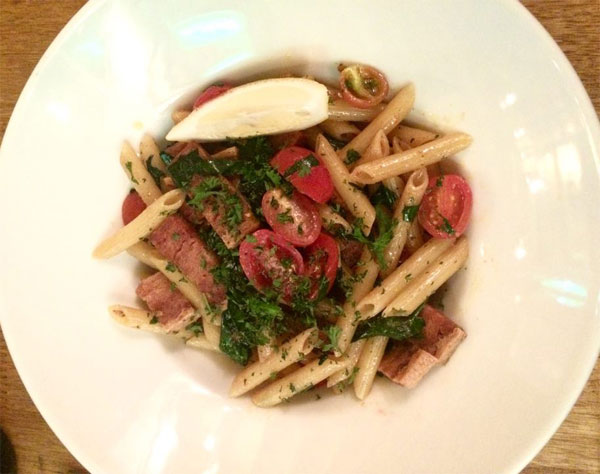 Elli: That vegetarian bacon was freaking amazing! Where can I get it? I couldn’t stop eating this dish. As in, Faz literally had to stop me from eating her half.

Faz: Yes I looked away one minute and all the bacon was gone. But anyway, how queer do you think this place is? It definitely has a feminist vibe, and while we were here we checked out these amazing art pieces by Thai artist Tinna Hongngam, which explored the impact of violence on the female body. They were stunning.

Yep – so let’s just start by saying that CHOMP! is not only a café but also an art gallery and community space. […] they’re definitely involved in some queer activism.

Elli: Every month they have a new exhibition, usually by emerging artists. And yes, there is definitely a feminist, female-positive atmosphere here. All of November they’ve been having a month-long campaign against violence towards women, with the exhibition advertised as “A Girl of November: A month long exhibition to end gender-based violence”. And I know that they’ve been trying to address LGBT women during the month, especially the trans community. So they’re definitely involved in some queer activism.

Faz: Yeah, and I’m sure there are more queer people than just us sitting around here. While the backpacker-y vibe outside doesn’t feel very intimate, their upstairs gallery and ad-hoc movie screening area (a piece of white canvas on the wall) feels really cosy and a place where consciousness-raising could happen.

Elli: All in all, it feels like a hip café that we’d have back home in Australia. 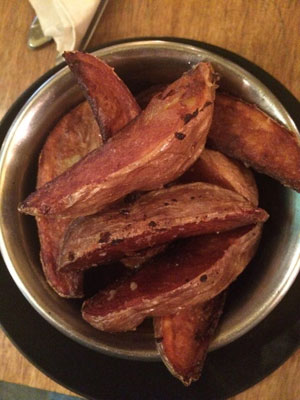 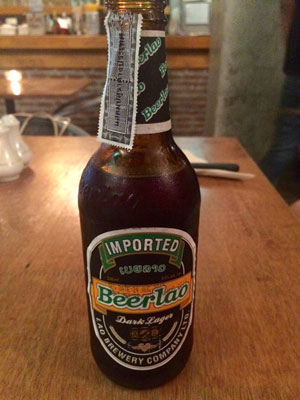 Faz: OMG, Elli, the brownies on their menu aren’t vegan. I thought the world knew that vegan brownies kick regular brownies’ butts. CHOMP!, you need to get on that… a filling vegan dessert would have made my night! Now all I have is the dark beer…

Elli: Hey, dark beer is fine with me. Another, please!

QueerMango’s Notes: CHOMP! Café has also hosted a speed dating night open to all gender and sexualities this passed San Vale day, so they are definitely queer friendly and for that they gained an extra point on the Queerometer.

Vegan Yumminess 3.5/10  | More vegan options than most, but the almost-vegan dishes that include egg or milk are disappointing for the vegan crowd.
Queerometer: 3/5 | An explicit focus on feminism and inclusivity in its various events makes CHOMP! rank pretty high.

More info on their page

Bring On the Queer Girl Power

Bring On the Queer Girl Power