An Inside Look into LBTI+ Activism, Struggles and Issues in Thailand

In order to take an inside look into LBTI+ activism, struggles and issues in Thailand, we joined Sattara Hattirat (Tao for friends) at the headquarters of Togetherness for Equality and Action (TEA) in Tonburi; located at the end of a small lane on the other side of Chao Praya river near Rama 9 bridge and set in a beautiful and large Thai house surrounded by nature.

Tao, and her group, are one of the few activist groups in Thailand who deal with issues related to Lesbians, Bisexuals, and the Trans community. They focus on empowerment of women, gender issues and lesbian-bi-trans-queer cultures. Their latest campaign was to participate and be part of the organization of IDAHOT in Bangkok, held on 12-17 May, 2015 at BACC.

We sit on the floor and we start digging into the fascinating topic of Lesbian, Bisexual and Trans activism in Thailand, by starting to know how TEA works.


What is TEA?
My friends and I started TEA, which stands for Togetherness for Equality and Action, with an aim to raise awareness and do something about human rights and empowerment for women who are lesbian, bisexual & intrasex and people who have links to the female social frame. This means that we include also trans women and trans men and use the word trans to respect their identity and make them feel welcome.

We are working from a feminist perspective and by feminist I would say ‘new feminism’, as ‘old feminism’ tends to focus more on the male/female polar gender theme. TEA believes that we cannot solve any social problem if we do not address marginalization or dominating power and suppression which goes beyond the male and female gender frame. Why? Because women can abuse power too.

We are focused on LBTI+ issues with a passion for marginalization issues. We know that everyone, including ourselves, grow inside society. So,when we talk about patriarchy, it’s not something that we can fight only from the outside, but we can see the importance of the change within and against the inner-grown patriarchy.

So we focus on work from everybody’s inner-self too, like the way we work with each other, the way we treat each other. We are trying to include a range of more creative struggle tools, in order to help to create a more powerful message.

When did you start TEA and what campaigns have you been involved in?
TEA is very new. It started at the end of 2013 and this will be the second year that we have received funding for our work from small international donors, like the American Jewish International Service and JASS (Just Associates), who work to make a grassroots women’s movement around the world.

JASS has a new way of working with feminism, in that it’s not only advocacy at the higher level that can champion the cause, but it’s about how to make a sustainable movement from the people and how to empower them so they know their rights and they know that they have the power to change.

Generally, we always try to link our local campaigns to international ones for greater visibility. For example, we co-organize IDAHOT Bangkok (International Day Against Homofobia, Transfobia and Bi-phobia) as well as campaigns on Women’s Day and also on 28th of September, which is the International Day for access to legal abortion.

Our goal is to blend LBTI+ movement to other movements of the region as well, because all the people from these movements should be linked. So, we are connected to the ASEAN Youth Movement.

Our general method of action is to make use of what people in Thailand have; a strong connection to spirituality and art. That’s why we are looking into different ways of inner expression, like figurative art, yoga, performances, drama techniques, writings, and other things that amplify people’s voices and stories. We want people to connect to themselves with the aim to empowering themselves.


Why is an LBTI+ advocacy group necessary Thailand?
There are many ways that acceptance is affecting LBTI+ people here in Thailand. However, if you haven’t been in Thailand long enough, you might think it’s totally ok to be gay.

This makes the situation in Thailand more difficult when you fight for SOGI rights (Sexual Orientation, Gender Identity and Gender Expression ndr) because in countries like Malaysia, where physical abuses are happening in front of your eyes, you can address the issues more directly. Meanwhile in Thailand, abuse and violence comes mostly inside the family. In order to address this issue, it becomes a more sensitive social issue because it isn’t considered “noble” to say negative things about your parents.

LBTI+ people face subtle forms of abuse, like smirks, verbal criticism or other subtle acts from their family and society. This happens because Thailand is held accountable to Asian values or norms. So, when westerners look from outside, you see people smiling and peacefully accepting diversity. In reality it is different.

(Here in Thailand) we smile more and talk to your face less, which is nice, but there are many other ways that people express disagreement or non-acceptance. If you know what they are, you would notice them.

Do you think that with the approval of an Equal Marriage Law in Thailand, the current situation of ‘acceptance’ would change?
The Civil Union Movement comes from the West and it helps to improve understanding. Thanks to that, LGBTI+ issues have had more media coverage. However,our perspective is that 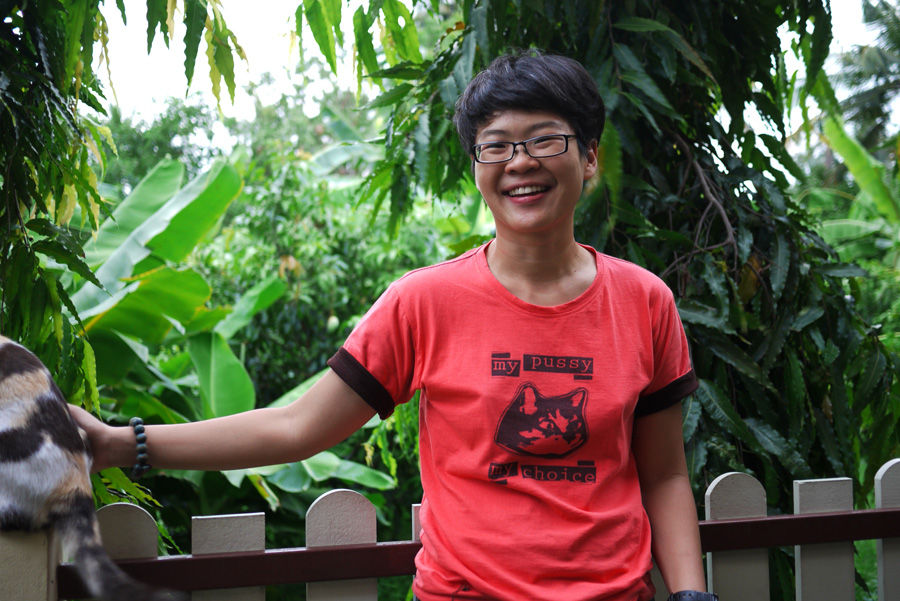 “(Thailand) has used a lot of resources to address the civil union problems, but it doesn’t really address the less violent abuses that LGBTI+ people in Thailand are facing. For example,abuse from the family, depression, unemployment, the problem of discrimination in public spaces and identity recognition.”

These are more serious problems and the way that this movement moves in Thailand, tends to address the middle class of LGBTI+ people. They talk about how to manage their properties when they are married for example. But more serious issues, like hospitalization rights have less recognition. For example, people who are LGBTI+ do not often go to hospital because of a matter of access. They know that their opinions are not accepted there and maybe it is difficult to explain their problems. Many of them are forced to live a life that is economically challenging because it is more difficult to find jobs.


Let’s talk more about you – When did you discover…or better, when did you realize that you were a lesbian?
I have known that I liked girls since I was very little. However, when you are 5 or 10 years old, you don’t really think that there is a sexual attraction between you and the people you like. So we don’t really name it, right? But I have always known that I was more interested in girls.I even fell in love with my best friend in highschool, but even then, I still did not label myself as homosexual.
Later on, during university, I was openly saying that I liked girls, but still I did not have any interesting encounters because I did not look tomboyish enough or feminine enough. My hair was long, but I considered myself quite tomboyish as I liked the “sporty types”. As a result, I found some issues to fit into the Thai Tom/Dee culture (Tom: Thai butch lesbian Dee: feminine part who dates only Toms ndr).
So, did you find it challenging to fit into the Thai categories?
At first, yes. I would say that it is troublesome because it makes people confused about what they really want and who they really are. Most Thai people try to put themselves in a box which identifies who they are. And when that box doesn’t really explain what that person is, it presents some level of conflict.

For example, at the beginning I was using LESLA website to meet girls. But the girls who would agree to go out with me, would expect me to be a Tom or girls who are Tom did not have any real interest in me. So, yeah, that has been a challenge!

Things began to change when I found Bangkoklesbian.com, which has people from other countries listed and so I could be myself and date people I liked.For example, if I chat with you, I would say “I’m a lesbian” because I like girls.

If you use the word “Lesbian” in Thai society people would think that you are a girl who dresses up in a girly way, who puts on lipstick or make-up, who wants to appear beautiful in a femme way and who is attracted to girls of the same femme type.

People would be confused about me, because at first glance they would think that I’m a Tom. But when I talk, my voice is soft and I use the term “ka” (which is used by girls). People can be more powerful when they can be totally themselves, so it takes power to individuals. I have seen people who try to put themselves into the Tom box, but feel conflict inside because sometimes they just want to be something different.

What would you say to a girl, who recently came out and doesn’t fit into the Tom/Dee boxes?
For any woman, I would say, not to follow society’s descriptors.They try to teach you to not believe in your heart and shape you to fit pre-determined criteria. But your heart tells you all the time what it is that makes things better for yourself and there is absolutely nothing wrong with that.

You can find out more information about TEA group and their activities on their Facebook Page.

On a final note…. we promise to dig deeper inside the world of Thai Tom/Dee/Lesbian categories again soon! 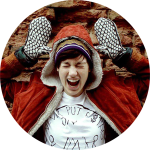 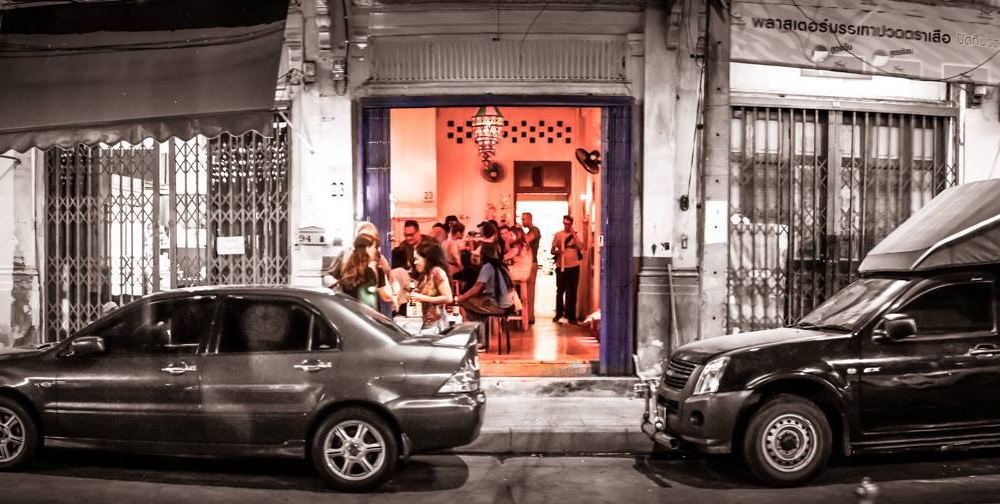